The Harbor Report: Angling for fun in the harbor

The last two weeks of April are always packed with activity around the harbor, and this year is no different.
This time of year I always check in with Amy Elliott at the Balboa Angling Club.
She said the 52nd annual Lily Call hosted by the Balboa Angling Club will be held May 16 and 17. "This is a tournament that's great for families and friends to get together at the start of the fishing season," Elliott said. "And it's a bargain for only $40."
The Lily Call is a tournament for fishing croaker, bass, corbina and halibut using a 4 pound line class within Newport Harbor. It is limited to the first 150 anglers. Lines in will begin at 12:01 a.m. Saturday with lines out at 2 p.m. Sunday and a cutoff for weighing fish at 3:30 p.m.
Last year's winner, Greg Taite, spent weeks getting ready for this tournament. In my May 2, 2014, column, "In search of the perfect fishing spot," Taite explained his choice of bait and how he found his spots on the bay.
This year's Lily Call awards presentation will be held at the Chicken Coop starting at 4 p.m. May 17. During the awards, a huge raffle will be held for all registered anglers. The value of these prizes in the past has been overwhelming. Sponsors have donated tons of gear, gift certificates and more. This raffle alone is worth the cost of entry.
Because the Balboa Anglers's clubhouse is under repair, it cannot hold the number of guests who normally attend. The club is actively looking for donations to be able to complete the project. Please visit the fundraising website http://www.crowdrise.com/ClubhouseFund/fundraiser/balboaanglingclub.
"The Balboa Angling Club hosts six tournaments this year, the Lily Call being the first, followed by the Yellowtail, Seabass and Halibut; the summer-long Junior Tournament; The Helen Smith Offshore Tournament; Newport Harbor Bay Bass Open; and finally the Master Angler Billfish Tournament," Elliott said.
The Balboa Angling Club remains one of the best values on the harbor, with yearly memberships at $175, $225 for the family and $25 for kids younger than 21.
"Once you've joined the Balboa Angling Club, you'll be hooked for life," Elliott said.
On March 28, 6-year-old member Sarah Taite set a new "pending" world record in the Female Small Fry Category with her corbina, weighing 4 pounds, 1 ounce and caught on an 8-pound line test. She said she used her favorite cousin's Tackle Raze RMB 734FPT rod and Shimano Trinidad 12 reel.
My understanding is that the current record, 3 pounds, 8 ounces, was previously held by another member of the angling club, Hailey Meinhardt, set in June 2012 when Hailey was only 8 years old. 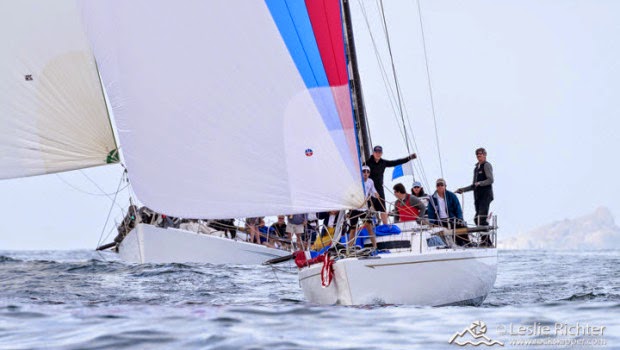 "This is a first for Sarah but certainly not the last. She's been fishing since she was 3," Elliott said, adding that "her father, Greg Taite, was the Outstanding Angler at the Balboa Angling Club in 2013, and he's also placed in all of the tournaments he participated in during the 2014 season."
*

On to Ensenada
I will give you one guess where I am going this weekend. If you guessed waiting for wind to fill in to finish this year's Ensenada race, then you guessed right. I am writing my column on Wednesday, and the weather forecast is not very promising.
On Friday, more than 200 entries are set to be on the starting line looking to find enough wind to complete this 125 mile race. All racers must complete the course before the time expires at 11 a.m. Sunday. A lot will change before then, and I am hoping for the best. My guess is that we will be finishing the race around 5 p.m. Saturday aboard the Santa Cruz 50 Horizon.
The key thing to remember is that the real way to win this race is to have the most fun with the people you are sailing with and enjoy. Wish us luck. We will need it this year.


LEN BOSE is an experienced boater, yacht broker and boating columnist.
Posted by Len Bose at 8:57 AM