On the Harbor: Completing Cabo not that easy


All of your well wishes seemed to have paid off for us aboard the Santa Cruz 50 Horizon in the Newport Beach to Cabo race earlier this month. Out of the 22 boats that started we were one of six that finished the race.
With the lack of wind at the start, fog and the cold weather it was quite enticing to drop out being abeam of Ensenada 48 hours into the race.
The way I saw it, once Roy Disney’s boat, Pyewacket, dropped out of the race, the herd just followed them in. Talking to the other crews, many boats did not have enough water, food, fuel or patience to finish the race.
Aboard Horizon we had all the above and decided to push on, 21 knots of breeze showed up our last day on the water. The whole crew was pleased to have completed the race and took it as valuable time on the water with our team in preparation for this years Trans Pac race to Hawaii.
Newport Harbor Yacht Club (NHYC) did an outstanding job in greeting us at the dock on our arrival at 3 a.m., with more than 10 NHYC volunteers providing warm welcomes and cold beverages.
Mindy and Nik Froehlich rallied the troops and our crew, then took us straight into the Awards/Trophy Presentation in the Baja Cantina.
The Santa Cruz 70’s Grand Illusion and Holua finished 1st and 2nd in class and overall. We finished third overall and 1st in our class. The Reichel/Pugh 77 Zephyrus finished 1st in class and fourth overall.
A huge well done has to be given to the NHYC Commodore Dwight Belden, who was the PRO and the Froehlichs for keeping the energy level so high and competitors well taken care of.

NHYC is not stopping after Cabo, they are moving straight into our harbor’s flagship regatta, the Baldwin Cup April 6th, 7th and 8th. This is the 10th year that NHYC has been using Harbor 20’s in a team race 4v4 format.
The Royal Thames Yacht Club from London, UK, will be traveling the farthest to attend this year’s event, along with the New York Yacht Club, Larchmont Yacht Club and Seawanhaka Yacht club, all from New York.
The raining three-year champions are from the NHYC Team Thunder. Most of the teams will be returning with Justin Law, Jeff Gordon, Caleb Silsby, Kayla McComb, Brian Bissell, Perry Bissell, Jon Pinckney and Gale Pinckney.
Missing from last year’s team is Michael Menninger who now lives up in the Bay Area. It has been said that Menninger was strong-armed by the St. Francis Yacht Club to jump ship from NHYC Team Thunder for this year’s event.

Justin “Lawman” Law, the team captain of NHYC Team Thunder, said, “Menninger’s leaving is understandable and with Caleb Silsby rejoining the team we got it covered. There is going to be some very tight racing this year! We are ready, I am ready to go sailing.”
Watching the Baldwin Cup marks the start of the sailing season and the migration of the local sailors to NHYC for the 25-cent beers and spectator seating in front of the club on the main dock. Not sure how NHYC is going to pull it off without a clubhouse this year, but from watching Commodore Belden’s team provide outstanding hospitality at the Cabo race, something tells me this year’s Baldwin Cup will be one for the history books.
The Harbor 20 fleet is always busy this time of year and over the last three weeks we started BCYC Weiss Series, then completed the NHYC Spring Gold Cup and Earl Corkett regattas.
This Sunday Weiss series, number 2, will be sailed in the five-point area of the harbor. Cole Pomery sailing A Salt & Battery has a big lead in C fleet after the first race of the series. Deb and Peter Haynes will have to keep Jessica Newman behind them to hold on to their lead in B fleet. In A fleet, Walter Johnson aboard Fortunate-Lee has Bill Menninger two points behind him.
• • •

While walking around the harbor this week I stopped suddenly and almost raised both of my arms in the air like an NFL referee signaling a touchdown while walking into the Duffy shipyard.
I glanced up onto the water and first noticed the new, dark blue hull, 58’ Duffield semi-planning motor yacht designed by Zurn Yacht Design and built by Duffield Yachts. It was love at first sight and as I approached, my heart pounded harder. With quick glances at the stainless steel wing door hinges, the welds in the railing, along with the overall fit and finish of the yacht – it left me in awe.
You will be able to see her at the Newport Boat Show the end of this month at Lido Village. She alone is worth the price of admission.
~~~~~~~~


Len Bose is a yachting enthusiast, yacht broker and harbor columnist for StuNewsNewport.
Posted by Len Bose at 7:00 AM No comments:

On the Harbor: the race to Cabo

This Saturday, March 11, is the start of the Newport Harbor Yacht Club’s race to Cabo San Lucas. I will be aboard the Santa Cruz 50 Horizon, like always, the week before the start is much more intense than the race itself. 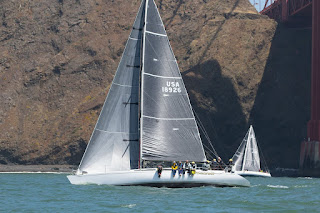 The owner of Horizon lives in Singapore and arrived in town on Wednesday. Picture the organizational chart, for Horizon, as a sports team with owner, general manager, coach and players.
Over the last three years I have been the general manager and have selected the captain or coach. The captain’s responsibilities are preparing the boat for the racing season, crew selection, provisioning and delivering the boat home after the race.
This year, I have also taken the role of captain and to say that I am a little bunched up right now is an understatement. I was very fortunate to have found Doug Cary, who has just moved into the area from the East Coast, and was crew member from a prominent sailing team. I am grooming Cary to become the skipper after a couple of seasons on our coast. Along with organizing and completing our boat’s maintenance schedule he is our bowman for this season.
Our navigator and delivery skipper is Richard “Chewy” Parlette, whom I have sailed with in five Trans Pacs and six long-distance Mexico races. The rest of our team is some of the best sailors Newport Beach has to offer: Buddy Richley, Justin Law, Greg Helias, Alex Steele and Carson Reynolds.
This is the youngest team I have put together thus far, with five members in their early 30s. What I am nervous about is how the team will come together, out on the ocean, and can we obtain the same results we did last year. We had a winning season last year with a 1st Overall in the Puerto Vallarta Race, California Ocean Racing Week and Santa Barbara to King Harbor Race.
This season started with the SDYC/NHYC Islands Race around Catalina and San Clemente Islands and finished in San Diego. We sailed well and the boat was up to speed with only a couple of bugs to work out with the boat’s electronics.
The Cabo Race is the second race of the season with the World Series being the Trans Pac race to Hawaii. With nine boats entered, that are Santa Cruz 50 and 52’s, the competition will be very strong this year. 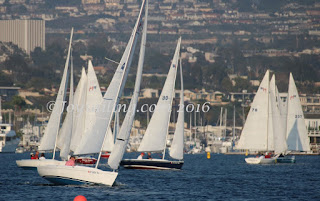 I am headed out the door now to start provisioning the boat along with dealing with the immigration papers for Mexico. All eyes are on the weather and all the different weather models. Wish us luck!
But, who needs luck when you have Greg Helias on your team. Helias won this last weekend’s Harbor 20 A’s Spring regatta and he has also won the Mid-Winters a couple of weekends ago.
A fleet is extremely competitive with 13 boats entered this last weekend. Perry & Brian Bissell finished in second followed by Walter Johnson in third. I pulled out all the stops and brought in a ringer Justin Law and finished fifth. In B fleet, Alex Steele won five of the seven races and won the regatta. He still had his hands full with Alex Curtiss finishing in second place just eight points behind him. Ted Reed sailed very consistently and finished in third. In C fleet, Tad Springer sailed away from the fleet with five firsts and will be moving up to B in the next event. At this pace, the Springers will be in A fleet in no time. 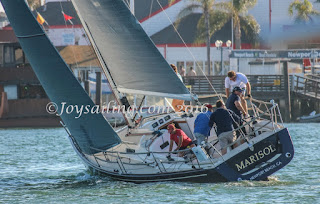 Out on the PHRF course this weekend, BCYC ran the Doug Mills Series with Seth Hall aboard his beautiful blue J-124 Marisol and won PHRF A, while Caleb Everett sailing Tortuga won PHRF B. This is a three-race random leg series with the last race scheduled for April 8. BCYC will also be hosting the next Harbor 20 event – the Loren Weiss Series on March 12 and the PHRF Bogart Series Race to Avalon on March 25.
Boat name of the week: Bar Killer
Sea ya!
~~~~~~~~


Len Bose is a yachting enthusiast, yacht broker and harbor columnist for StuNewsNewport.
Posted by Len Bose at 8:10 AM No comments: