Connecting the dots around the harbor.


I feel it is time to update on whats going on around the harbor now that fall has arrived and it’s 101 degrees today.

It is official the Newport Harbor Yacht Club will begin demolition of the club house the first part of January 2017. The news should make for a rather interesting New Years Party to start the new year off with a boom rather than a bang. The process has been drawn out for a long time, first applying for city permits in 2012. Part of the final terms with the Coastal Commission requires the club to fund $350,000 toward public-access improvements. These funds have been directed to build a public pier at the Central Ave bridge, next to The Elks Club in Lido Village. From my sidelines chair it all seems good to me. Although I kind of feel for now Vice Commodore Dwight Belden who will be the Commodore next year with first reports indicating that the construction of the club house will take up to eighteen months. I hope he can keep his parking place. 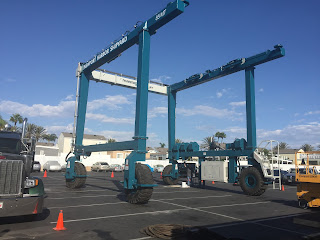 Next I heard that, during this last week of September 2016, that my very good friend Jim Warner is getting some new wheels. No Warner is not getting a new Jeep, Warner is the Travel Lift operator at the Newport Harbor Shipyard which will be receiving and building a new 85 BFMII Marine Travelift this week. This is the newest model from the Travelift company and comes with all the bells and whistles like a sound suppression system, all wheel electronic steering to maximize maneuverability, spreader bars to lift a wider variety of hull designs. While on the phone this last week with yard manager Jesse Salemen informed me that they do not plan on naming the Travelift or christening it although you can hear the excitement in his voice about the shipyard newest purchase. Should be interesting watching it all put together this week and you thought that Ikea furnishings came with difficult assembly instructions. 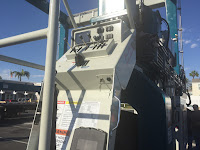 I learned a few new things this week while attending this months Harbor Commission meeting. I have reported in the past that it is always good to see our Harbor Master Lt Mark Alsobrook
along with Deputy Kevin Webster giving their reports to the Harbor Commissioners. In regards to the use of the temporary anchorage in the turning basin, just in front of Lido Village. Lt. Alsobrook reported that from June 6th to August 28 sixty-one different vessels used the anchorage. Of this sixty-one many were repeat customers, with thirteen vessels spending the night. The Harbor Patrol made two hundred and thirty-one patrols of this area during this time.

Regarding our moorings there where one hundred and thirty-one rentals, nine transfers and three derelict boats removed during the same time period. It is my understanding that the temporary anchorage will stay open until Oct 15. I feel that this anchorage has been a great success and should be continued in the future. I still do have concerns with the Jet Pack  companies being allowed to use this same area, my personal opinion is that the Jet Pack  should be moved outside the harbor in the Big Corona area. Next there will be drone’s pulling board riders and I hope that also get placed outside the harbor.

There is a big save the date that I recommend you place on your calendars now! December 10th at 9:00 AM the Harbor Commission will be touring the harbor aboard one of the Balboa Island car ferry’s. This idea was done a couple of years ago and was a big success with all the Harbor Commissioners attending and reviewing their objectives. Attending this event will be the harbor department, harbor resources department and city council members. Topics may include if the Jet Pac should stay in the turning basin, what is a derelict boat, should we have more than one launch ramp, acceptable noise levels on the harbor, best use of The Castaways property, public piers, harbor standards that will blend into the City’s sustainability plan and so much more. I personally enjoy standing behind council members trying to ease drop into their conversations, there could also be three new council members attending this event. Mark your calendars now. For more information contact Harbor Commissioner Joe Stapleton at joems55@gmail.com who is chairing this event.

For me its all about the Harbor 20 fleet one championships on October 8th and 9th. All our harbors best sailors will be competing to be champ, my wife Jennifer and I will be sailing our boat Only Child hull number 108 this year.  Wish us luck. 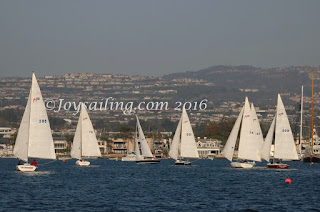 The Harbor Report: Breathtaking boats and a busy bay

I have been walking around with my head down this week trying not jam my foot into a dock cleat’s looking for a story. Finally I lifted my head up and the harbor is full of activity this week.

I started my rounds at the Newport Harbor Shipyard and before my eyes was one of my all time dream boats. The “Piano Man” himself Billy Joel ’s previous vessel “Vendetta” had just arrived into the shipyard and will soon grace our harbor. This 57’ Gatsby-era commuter yacht designed by Doug Zurn and built by Director in 2005 is absolutely stunning and will make you stop in your tracks.

I am a huge fan of commuter style yachts and had noticed “ Vendetta” as soon as she was listed and thought to myself how perfect she would be over at Catalina. With a reported speed of 47 knots the new owner can make it over to the island in less than an hour and accommodate up to six guests.

She is guaranteed to be on the Newport Beach’s most interesting power boat list this year, rumor has it that the boat will be placed in the water for the rest of summer and then hauled for a refit. Which is like saying Julianne Hough needs a make over, I am not going to lie they are both pretty hot just the way there are now and is a perfect example on why we refer to boats as females. Yea I know thats a rather chauvinistic statement, but “what are you going to do?”

After taking a couple of deep breathes and regaining my composure I looked across the bay and noticed that The New Port Marina and Office buildings, near the Crab Cooker on Balboa Peninsula, is almost completed. From across the bay it appears that this marina will have will have over sixteen slips that will be able to hold 55’ foot boats.

From the shipyard I normally take a look at how many big boats there are on Lido Peninsula in the BellPort Marina. Right now the big slips are full to capacity and I counted nine boats over 70’ feet.  My next stop is next to the Lido Sailing Club to get an idea how many big charter boat are in town. The number of 14 stays rather consistent throughout the year for the charter boats.

Continuing around the harbor to Basin Shipyard where the Stan Miller Invitational fishing tournament is under way. The word was that close to forty boats will be competing for Tuna, Yellowtail, Dorado, Swordfish and Marlin release categories. The tournament kicked off on Friday Sept 9th at Basin Marine Shipyard and fishing starts immediately after Captains Party. Awards will be on the 11th at 18:00 at the shipyard. So if you see a lot of good looking sport fishers in the harbor this weekend the reason is because Viking, MagBay and Hatteras yachts are sponsoring the event.

I also had a chance Noel Plutchak this week, some of you might recall that Plutchak repairs our pump out stations around the harbor. Plutchak reports that he is still having problems with boaters using the pump outs as a bilge pump. When boaters do this the pumps suck up loose metal and screws which interns cut the vacuum hoses inside the pumps at a replacement cost of $1,000 apiece. What is bound to happen is that the pump out hoses will get smaller and smaller so that the boaters cannot take the nozzles down below there boats and into their bilge’s. Not to make a pun, but that that really sucks, because some of us have our deck flanges in the bow or in the stern of our boats. So if you see someone coming up from down below with the pump out nozzle you can always take the make and the name of the boat and drop me a note at boseyachts@mac.com. I will discreetly pass the boat names on to the proper authorities and marina operators. 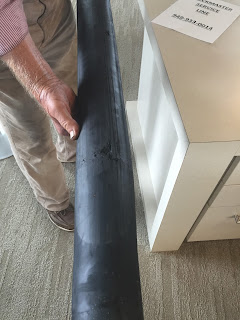 I am starting to look around the harbor for boats to place in Newport Beaches 20 Most Interesting Boats this November. If you see anything I should mention please droop me a note.


LEN BOSE is an experienced boater, yacht broker and boating columnist for the Daily Pilot.
Posted by Len Bose at 7:44 AM No comments: