On the Harbor: Catching up with my good friend Mark Gaudio

By LEN BOSE
I picked up the phone this week and called my good friend Mark Gaudio for an interview. If you have ever raced a Sabot, Lido 14, Harbor 20 or Cal 20 the name should be familiar to you.

Gaudio was first introduced to the harbor in the ‘60s by his father, Ed, who first owned a 20-foot Glasspar powerboat. “I remember doing speed circles in the Back Bay with my dad,” Gaudio said. His father was an electrician and after working on a house on Lido Isle, the owner gave him the old Sabot on the side of the house. “I think I was six and my father had painted the boat with some sort of latex house paint in some ‘60s color. We rigged the boat up and went sailing. Just about the time we reached the Lido Isle Yacht Club, we gybed the boat, while dad was sitting on the main sheet, and we flipped the boat,” Gaudio explained.
The Gaudio family was very active in the Orange Coast Yacht Club, which had its clubhouse at the American Legion. Later, the club would merge with the Bahia Corinthian Yacht Club and the Gaudios where there for the groundbreaking of the clubhouse now located on Bayside. “I have a photo of dad somewhere with him planting a shovel into the ground on the club grounds.” 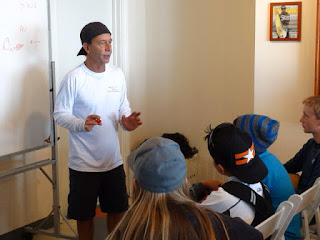 Gaudio recalled fond memories on the harbor now lost in time. “We used to sail our boat over to Shark Island, now Linda Isle, and play Army. From there we would walk over the Pacific Coast Highway bridge to Will Wrights for ice cream. Summer days seemed to have the wind blowing 10 knots out of the west. We could pull our boats up onto a beach at the Fun Zone and goof around there, or we would sail up to the 19th Street beach and go to Tasty Freeze. Sometimes Phil Ramming and I would just fill our boats with water balloons and throw them at people on Balboa Island. You cannot do that now, but it sure was a lot of fun then,” Gaudio recalled. 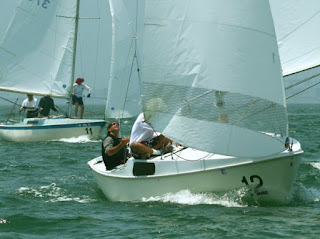 Today, Gaudio spends most of his time on the harbor coaching sabot sailors. During the summer he has more requests for coaching than he can handle, while during the winter he coaches Friday afternoons for BCYC and gives private lessons on Saturdays. He is the go-to guy when it comes to finding the racing sabot our just tuning one up. “Tuning a sabot is all about mast rake, leeboard angle and a vertical rudder,” Gaudio said. Most sailors in the harbor who have been coached by him recall the words: “Get off your knees.”
I asked Gaudio what are the dos and don’ts for sabot parents? “Parents can be overly competitive, which can lead to performance anxiety at the wrong time. Sailing is a hard sport, with many variables, weather included, it can be frustrating…sometimes physical, but mostly mental. Once a kid starts moving up, stay away from move up itis,” Gaudio said.
Gaudio explained that one of his concerns today is that there is too much focus on racing, with not enough attention on just harbor exploring and having fun. There are some kids out there today that will not leave the dock without a coach. In the end game, he feels that this is hurting our sport. 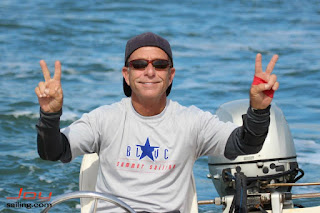 So, before we ended the interview I asked for some simple bits of advice that I can write on my notepad. “Don’t pinch in light air, keep the boat moving, always look around to assess your competition. The wind in our harbor is the trickiest when it is coming out of the southwest with a bearing from 200 to 245 degrees when you should focus on connecting the dots. When the wind is left at 200 degrees, consider going left; when it is right of 240 degrees, consider the right side of the course. Remember that you have a lot of traffic in the harbor to stay away from, and he always reminds his students to anticipate the high odds maneuvers of competitors.
This Saturday, the Harbor 20 fleet will be racing in the Earl Corkett Regatta out of the Newport Harbor Yacht Club. At BYC, the Lido 14s will be gathering on Sunday for the Harry Wood Regatta. And, the PHRF fleet will be sailing out of BCYC to Catalina on Saturday and returning on Sunday in the Bogart Race.
Keep it, fun everyone.
Sea ya!
~~~~~~~~
Len Bose is a yachting enthusiast, yacht broker and harbor columnist for StuNewsNewport.

On the Harbor: My sail from San Diego to Puerto Vallarta

The clocks have moved forward and spring sailing season is underway. This last week I was sailing aboard the yacht “Horizon” in the 2018 San Diego to Puerto Vallarta Yacht Race.

The forecast was for a light sea breeze out of the south and dying off as we reached Ensenada. This forecast left Friday starters with a bit of a hindrance because the smaller boats in Division 7 had started the day before with a clearing westerly and there were reports of 40-knot squalls and blown up spinnakers. Saturday starters are the big boats like the 100-footer “Rio,” Andrews 70 “Runaway” and Roy Disney Andrews 70 “Pyewacket.” Their forecast was for 15 knots out of the southwest.

With that aside and a 1,000 mile-race to Puerto Vallarta, we knew that there would be many opportunities for us to make that time up on the other boats for the overall standings. One thing that always comes to mind is that the race is never over until you cross the finish in a Mexico race. I first heard this saying from Newport Beach City Councilmember Brad Avery back in the ‘80s and have always remembered it.
Out of the starting gate, it was our class favorites “Horizon” and “Lucky Duck” side by side reaching out of San Diego harbor and pointed for the Coronado Islands. At this point, on “Horizon” it officially became duck season. The two boats exchanged the lead at least five times down the Baja coast, always staying within eyesight of each, and crossing jibes under the light of the full moon at night. When two competitors meet up like this, they normally push their boats that much harder with the sail changes happening with each wind shift rather than giving it the old five-minute rule and waiting to see if the wind will shift back.

Life aboard “Horizon” goes into a four-hour off, three-hour on watch system after the first dinner with three people staying on deck, unless we have to make maneuvers and everyone is called on deck. With each maneuver, be it sail changes or gybing each crew member, the assigned position throughout the race never changes. For example, the same person will drive the boat, just like the same person will be in charge of pulling up and letting down the halyards that lift the sails up and down.

I am also listed as the chef aboard the boat and by today’s race boat standards that is not too far from the truth. In an effort to save weight, most competitors are chocking down freeze dried foods which I hear are not that bad if you can add your favorite hot sauce. Aboard “Horizon,” breakfast consists of yogurt and granola or cereal with fresh fruit. Every other day I will warm up some Jimmy Dean breakfast sandwiches, which are always well received. There is nothing more appreciated than a warm meal while you are out to sea. For lunch, I’ll fix deli meat sandwiches with avocado, onion, and lettuce, and on odd days serve up hot dogs, which have seemed to be the crew’s favorite. For dinner, we ask for volunteers to provide the boat with dinner casseroles with favorites being beef stroganoff, pasta bake, and enchilada pie. Each dinner is served with a fresh salad and choice of dressing. After the galley is cleaned up, I’ll fill a container with candy bars, trail mix and or some dried fruit along with leaving the Starbucks instant coffee and hot chocolate packets out for the crew. Now that might not seem as much of an effort on my part, but have you ever tried boiling water for hot dogs while tight reaching with the 3A spinnaker up and the boat leaned over in a mixed sea? It is rather challenging just serving the meals to the crew. 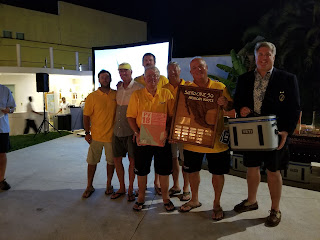 One of the largest obstacles of this race is navigating past Cabo hole, which can block the wind as much as 30 miles away, before entering the Baja Gulf on your way to Puerto Vallarta. So, there we are with the Duck just close enough that we can talk to them. As night falls and the full moon has not yet risen, the two boats split so that we can’t make out our running lights. This is when our navigator, Alex Steele, puts his plan into effect on how to work our way through the Cabo hole as fast as possible. Steel put in a ton of time studying this part of the course and just crushed it. The next morning, the Duck was more than 30 miles behind us in four knots of wind, while we were close reaching in at 15 knots headed straight for the finish line.

Like I mentioned before, a Mexico race is never over until it’s over, and we kept the throttle down until we crossed the line with a first in our class and seventh overall. Another great race with a solid group of sailors from our harbor! This years’ crew was John Shulze, Len Bose, Alex Steele, Justin Law, Tom Okeefe, Craig Chamberlain, Andrew Dippel, Doug Cary and Greg Newman. Now we have to get the boat home and start getting ready for the upcoming Ensenada race.
Sea ya!
~~~~~~~~
Len Bose is a yachting enthusiast, yacht broker and harbor columnist for StuNewsNewport.
Posted by Len Bose at 8:24 AM No comments: