There has been a tremendous amount of time and thought placed into Flaca to keep her at top performance. When viewing this vessel please note the freshly painted hull and deck tops, sail inventory, standing rigging, and up dated rudder. This boat has always been known as one of the magical SC 50’s!
There was 28 Sc 50’s built, two have been destroyed, eight have been made into cruising boats, five are are now charter boats, six are in disrepair. That leaves you with roughly seven boats that are in very good condition. Flaca makes it into the top four SC 50’s that are still around and for sale.
If you and most of your crew are over forty years old and you want to race and win offshore there is know better boat than the Santa Cruz 50. 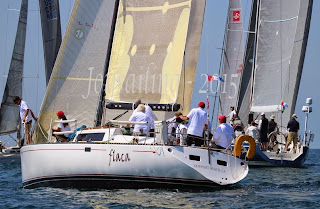 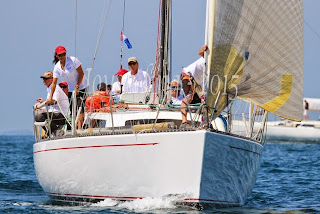 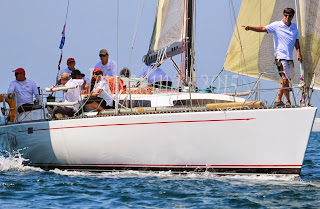 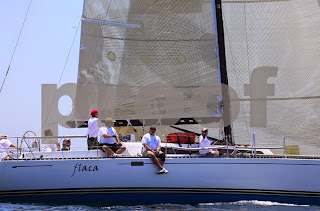 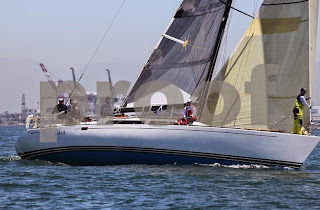 Specification sheet
Posted by Len Bose at 6:00 AM No comments:

This weeks Traffic Report around the harbor 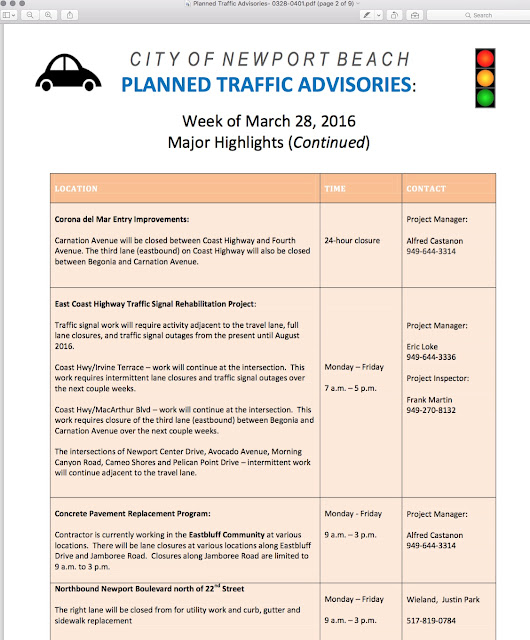 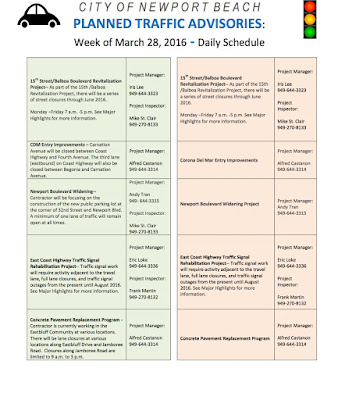 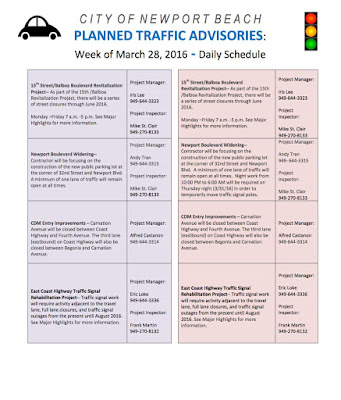 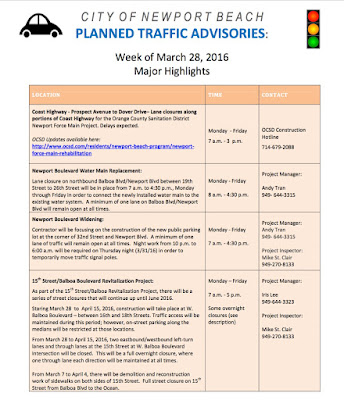 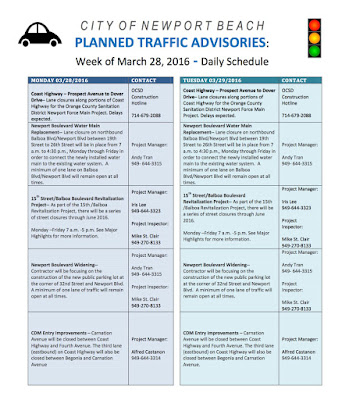 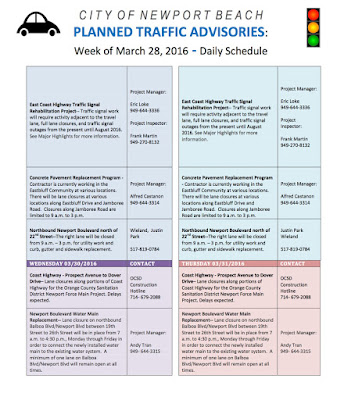 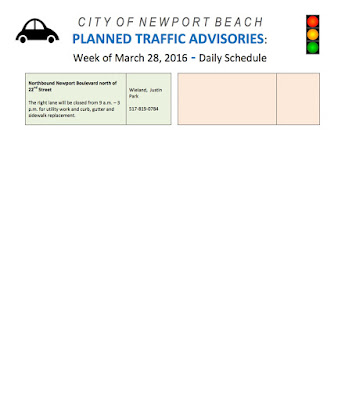 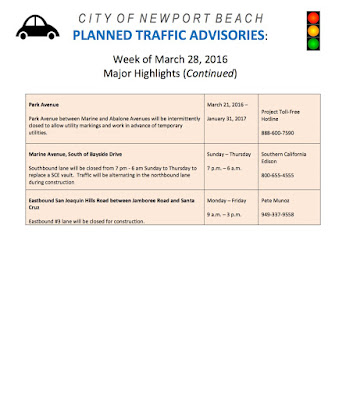 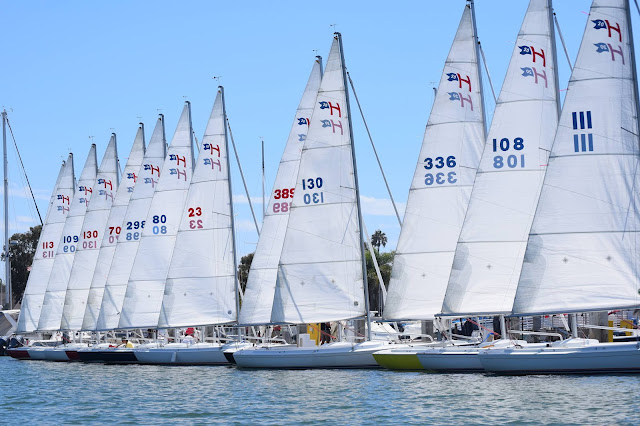 There's lots going on in the harbor in the upcoming weeks, along with a few topics on which we all need to stay aware of.
It's always good when a plan comes together and shows proven results. Harbor Resoures has received a grant from the state referred to as the Vessel Turn in Program or (VTIP).
This allows recreational boat owners to surrender to the city their unwanted boats for demolition.
Twenty boats have been removed from our harbor over the last year using the VTIP grant. I watched an old Islander 30 sailboat being towed by the reaper, a commercial mooring barge, last week, and it's kind of sad because I can remember when Islander 30s were new.

Our harbor is becoming more attractive every day with the removal of these unwanted boats.
***
The Harbor Commission will recommend to the City Council a trial run for a secondary anchorage in the turning basin in front of Lido Village, or what I refer to as next to Z Mark.
The trial could start as early as the Memorial Day weekend and run through Labor Day. Special attention will be given to the amount of activity the anchorage draws, along with the noise level.
Do we need a second anchorage? Yes, we do. This trial is good for the harbor, and I look forward to reporting this summer's findings.
***
While we are near Lido Village, next to the Elks Lodge, the city is making plans for a guest dock at the end of Central Avenue. It just so happens that the Newport Harbor Yacht Club membership is deciding whether to build a new clubhouse and, as part of that agreement made with the Coastal Commission, NHYC is to provide more public access to the harbor by building this new public dock.
Should membership vote not to build a new clubhouse, the city is making funds available to build the dock anyway. The concept for the dock would be for small boats and dinghies providing access, from the water, to Lido Village, and the conceptual walkway that could wrap around Lido Village to Mariners Mile.
***
By now most of you have heard that the Adrell properties were sold earlier this year. The investment group that purchased the properties has purchased much of Mariners Mile.
Will anything happen soon? I would guess not, although I can tell you what my gut is feeling.
My greatest fear is we will have a continuation of similar structures like the Balboa Bay Club extending down the mile resembling Marina del Rey. This could lead to further noise restrictions on the harbor, particularly from increased waterfront residences.
This has to be paid attention to.
*** 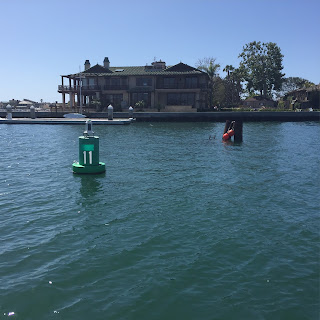 I wish that more of our harbor's powers that be would address the old-style channel markers and do something with these obstacles to navigation.
You might recall the old No. 8 channel marker and how a larger vessel ran into and crushed it in half. You also might recall how long it took, with the Coast Guard, to remove this old marker and replace it with a much smaller floating buoy marker.
Just before the boat parade last Christmas, a larger boat rammed into the No. 11 channel marker and broke it in half. The Coast Guard quickly replaced the channel marker with a new floating buoy.
The concern is that the old channel maker, mostly obscured under water, is still in place.
Why do we still have these old-style channel markers in the harbor? And do we have to wait for a larger vessel to crush these markers before we have to replace them and let a year pass before we remove the old pilings?
What many of you might not know is how many smaller vessels run into these old markers and how much damage the markers make. 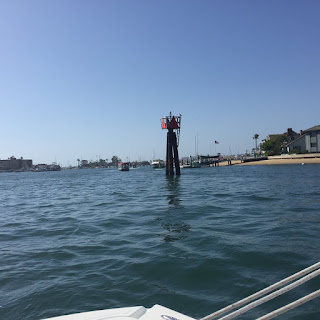 ***
The new RPG 54 and Newport Beach Eelgrass Mitigation Plan has been in place now for a couple of months, and the good news is that people are now starting to inquire about dredging their slips. Forty residents have picked up information packets on how to start the dredging process.
The concern is how many people will actually be able to get a dredge in front of their slips. One of the big parts to this puzzle is where you place the sand if you do not have beach in front of your house. Without a beach, one has to place the sand on a barge and take it out to a dumping area.
This can be cost-prohibitive. The question now is how to find ways to more effectively remove and dispose of sand.

“What goes on at sea”

At the end of my last column I asked you for luck and good winds as we raced the 1,100 miles from San Diego to Puerto Vallarta aboard the Newport Beach-based Santa Cruz 50 Horizon.
Now it is my turn to thank you for all the well wishes because we won our division and the race overall.

Rather than bore you with all the fine details on how we won the race I thought it might be more interesting to answer the frequent question I get from the general public when we do these offshore races.
We sailed the roughly 1,100-nautical-mile race from San Diego to Puerto Vallarta in four days, 13 hours, 52 minutes and 19 seconds. We won on handicapped time which is far too difficult to explain other than larger boats owe smaller boats time at the finish line most of the time.

One of the first questions I get is: What do you do at night?
We race through the night and the day until we reach the finish line. There is no stopping at sunset and sleeping until 9 a.m. the next day. 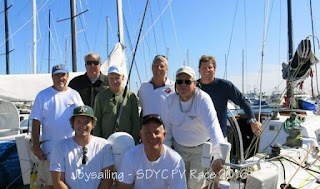 Our crew consisted of eight sailors, of these eight we would keep four members on deck racing the boat. Every two hours two new crew members would come on deck, so if you do the math that is four hours sailing and four hours off watch.
If you are lucky you can get a good eight hours of sleep a day. After the first day this routine becomes easier on you.

How do we see at night? We were very fortunate this race to sail under a full moon. It was like the police helicopter was behind us with the search light on. Not that I know what that is like.

This is always a good question because I have sailed on those moonless nights, when you cannot see what's in front of your hand, and that changes the game completely. When this happens you rely on your wind Instruments similar to how an airplane pilot flies with zero visibility.

What do you eat and how do you prepare your meals? Some race boats take this to the extreme in both ways. One boat might only bring frozen dried food and a single propane burner to do everything to save on weight on the boat. While the other boats are serving four-course gourmet meals with wine, with all the galley appliances. 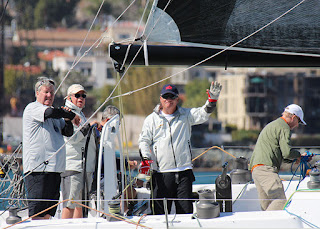 Aboard Horizon we have a full-size galley, refrigeration and a three-burner stove top and oven. We ask each of the crew to bring a frozen casserole that will feed eight, lunch meats for lunch and yogurt with granola along with the fixings for a couple breakfast burritos for breakfast.

I also provisioned the boat with a lot of grazing food, for example different types of trail mix, dried fruits, beef jerky, chocolate covered almonds, espresso beans, and cherries. Our navigator kept asking me where I was hiding the rest of the food, but we made it and no one else was questioning me if we brought enough food. Not to forget there was also plenty of instant gourmet coffee and hot chocolate.
If you are wondering about water, most, if not all the boats, have water-makers installed on their boats. We stored 15 gallons of bottled water in case of an emergency, another four cases of 12-ounce water bottles just to get started and for luck 5 gallons of water in one of our water tanks. We made about 8 gallons of water a day the last half of the race.

Back in the day the only way to communicate with home or the race committee was over the single sideband radio SSB. We still keep these radios aboard for your last go-to should the world end.

Today, our daily position reports are transmitted via satellite emails or satellite phones. One of the biggest area of change over the last 10 years is the weather information that you can obtain over the Internet. This data is very expensive and the good navigators are very good at getting the information they need quickly and getting offline ASAP.

To my advance readers that have done many of these offshore races, still wondering how we won? I can explain it in one word: "preparation."

This race was the 32nd time I have raced down the Baja coast. Now blend in the 10 times I have raced to Hawaii, and I have never sailed on a boat that was so well prepared for an offshore sailboat race as Horizon was and is.
For this I have to thank our skipper Stan "the Man" Gibbs and of course the owner of this sailing team, John Shulze who resides in Singapore.

Lots going on in the harbor and will update you in my next column. Thanks again for the luck.
Sea ya.