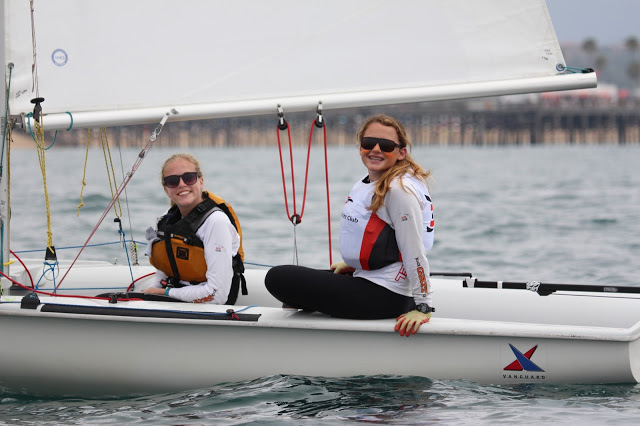 This is why I do it, feel like I just closed a million dollar deal.


Hi Len,
My name is Leslie Bubb and on June 29, 2013 you wrote the most wonderful article about our daughter, Madeline Bubb, who had just completed her freshman year at NHHS and was sailing in the Ida Lewis Regatta.
Four years have passed and not only has she persevered in sailing (as you might recall she pretty much came in last at that regatta, or close to it) she is now sailing in college.
Madeline was recruited last year by Stanford and is just now completing her freshman year. She is in Charleston, SC right now and will be sailing tomorrow for the All Girls Team at Nationals.
The article you wrote is in a frame on our piano so I thought it only fitting to let you know how far she has come in four years.
Thanks for being such a strong advocate for sailing.
Wishing you all the best,
Leslie Bubb
http://lenboseyachts.blogspot.com/…/the-harbor-report-hopin…
Posted by Len Bose at 8:54 AM No comments: 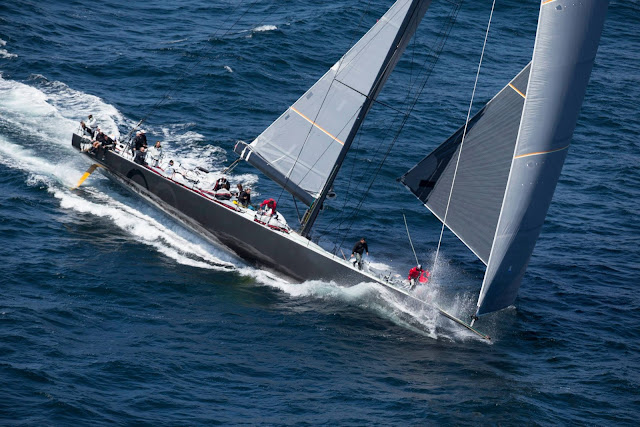 By LEN BOSE
Back in 2000, I received a phone call from a perspective client asking me if I would be interested in listing his IMS 50 “M-Project.” Knowing the boat and where she was berthed I was ringing the doorbell, within the half hour of hanging up the phone with Manouch Moshayedi. Unfortunately for me, I was unable to find a buyer for M-Project, although I was able to meet a person who had a newborn passion for big boat racing. 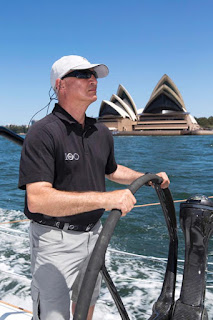 Moshayedi attended Cal State Fullerton from 1979 - 1981 and received a degree in structural engineering. He moved to New York and worked there in the field of engineering and construction project management until 1987; at the same time he attended Long Island University and received a MBA in corporate finance.
He married in 1983 and came back from NY with his wife and two daughters to Newport Beach in 1987. “I started sailing that year when my father in law who is an avid sailor came to visit in the summer,” Moshayedi said. “I then crewed on multiple boats, mostly in Beer Can races and small local races. I bought my first boat, Black Jack (a MacGregor 65’) in 1991.
“After sailing the boat for four years, I took about four years off and then I bought an IMS 50’ called M-Project in 1998. I sailed M-Project for four years and retired from sailing for seven years as I had taken my electronics business (Simple Technology) public in the year 2000, and was quite busy at work. In 2012, I purchased my first TP52 (RIO), In 2013, I purchased my second TP52, a Botin-designed boat and participated in the Super Series in the Mediterranean. This was by far the most enjoyable racing I had done. Very close racing at a very high level.”
Today, Moshayedi spends his off time racing two of the most recognizable yachts on the West Coast of the U.S. – Rio 100 and Rio 52; Rio 100 is a 100-footer that was
refitted in 2014 by Cookson Yachts in New Zealand. This boat was redesigned with one thing in mind and that was to win the Transpac Barn Door trophy. This trophy is awarded to the first boat to finish with only manually powered systems – no stored power, no canting keel, no water ballast, no daggerboards, no electric winches, and no hydraulic rams. Rio 100 completed this task in its first Transpac in 2015. She will be on the starting line again this year with the intention of overtaking the Barn Door time record set by Hasso Plattner’s “Morning Glory” of six days 16:04:11 set in 2005. 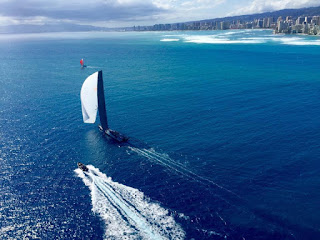 To get a better feel on how one organizes a two-boat sailing program with more than 16 crew members alone on the race to Hawaii, I asked about his team’s organizational chart and who does what. Both Rio 100 and 52 have one captain and that is Keith Kilpatrick, who grew up in Newport Beach. Kilpatrick maintains both boats and keeps them prepared for the season’s scheduled events. He also arranges for the crews’ hotel rooms, ships provisioning, preparing meals and delivering the boat home. Kilpatrick is a friend and has, for as long as I can remember, been a key fixture in Newport Beach boats that have made it to the Grand Prix level of yacht racing.
My next question to Moshayedi was what is the most important part in doing well in the Transpac race? “The most important part of the race is preparation that Keith always does a great job of making sure everything is as it ought to be,” Moshayedi shared. “Preparation and getting to the start line with confidence that everything has been double checked and we can finish the race barring any unforeseen incidents is probably the biggest challenge of the Transpac race.” 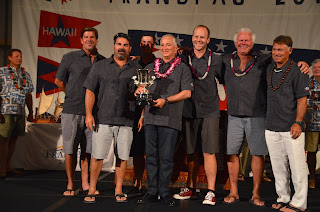 Moshayedi went on to explain his next project the Pac 52 fleet. “In 2015, my friend who owned a 2005 TP52, decided to upgrade his boat and after talking to me, he decided to build a new turbo TP52, which is called FOX. Knowing how enjoyable riding these boats are and how frustrated some of the owners were with the current rating systems, I spoke to quite a few and convinced two of them to also build or buy turbo TP52s. Two owners decided to build new boats ‘Invisible Hand’ and Bad Pack’. At the same time, I also ordered my PAC 52, Rio. We all sat around with our boat captains, designers and tacticians and came up with a schedule of regattas and a set of rules for our fleet of PAC 52s.”
You will have a chance to see these Pac 52s when they compete here in Newport Beach in the debut of the Newport Harbor Yacht Club’s One Design Offshore Championships June 9 - 11. It is my understanding that the boats will be berthed at the Sea Scout Base and OCC Sailing Base where the public can view these new Grand Prix racing machines. Extra attention will be given toward social media outlets with daily video releases during the regatta. For all the information about this new one-design fleet, go to www.pac52class.com.

Sea ya
~~~~~~~~
Len Bose is a yachting enthusiast, yacht broker and harbor columnist for StuNewsNewport.
Posted by Len Bose at 6:50 AM No comments: