On the Harbor: A devout appreciation for the N2E

Today, Friday, April 26, is the start of the 72nd annual Newport to Ensenada International Yacht Race. Over this last year, I have volunteered as a director of the Newport Ocean Sailing Association, NOSA, the organizing authority of the race. The race was first sailed in 1947 and had its hay days in the 1980s, when 675 boats entered the race in 1983. Today, with the participation numbers at an all-time low, many observers place the blame on the violence at the border, NOSA and the downturn in participation in the sport of sailing.

Now, I am not even going down that road to explain the decreasing numbers of participants in sailing events. What I will be trying to illustrate is the history of the Newport to Ensenada International Yacht Race, by acknowledging what goes on behind the scenes and the connection between the city of Newport Beach, Ensenada and the sport of sailing. In addition, recognizing the volunteers of NOSA who make this event unique to our sport.

I participate in most, if not all, of the west coast offshore sailing events. What I have noticed is that most of these events have become more and more distant from the destination ports. In the early years of the Cabo San Lucas race, most of the town greeted the arrival of the fleet. Today, the marina operators were unable to provide slips for the fleet. Present day Trans Pac finishes are not recognized by Hawaiian news outlets, while greeting parties are becoming more difficult to find after each race.

I was pleasantly surprised in the efforts that NOSA continuously exerts year after year in keeping the original connection between the two cities. For example, for the last 20 years, Toni Baiunco, a NOSA director, has been in charge of all public relations with the city of Ensenada and has again organized the annual Mayor’s Reception where 16  Ensenada dignitaries will be attending a dinner aboard a Hornblower dinner cruiser with our local officials. Ensenada dignitaries include Marco Antonio Novelo Osuna, the Mayor of Ensenada; Carlos Manuel Luna Herrera, Delegate of Immigration in Ensenada; Captain Daniel A. Maass Michel, Ensenada Harbormaster; David Perez Tejada Padilla, Customs and Port Administrator of Ensenada; Oscar Escobedo Carignan, Secretary of Tourism, Baja California, ALMT; C.G. Dem Jose Luis Cruz Ballado, Commander; and Naval Region 2a International Affairs Director Jared Gutierrez Lopez.

It should also be noted that since 2015, NOSA has hosted an annual fundraiser, which raises $7,000 - $10,000 for Centro de Atencion Especializada Para Autistas, or CAEPA, a school in Ensenada for autistic children being operated on with a microscopic budget. Funds raised have paid for teacher and therapist salaries, allowing them to attend specialized educational conferences. They’ve fixed the roof, repaired the beat-up van, purchased office supplies and installed their own safe water system. Today, the school’s capacity has grown from seven kids to 28, with many on a waiting list.

At this point, you are probably asking yourself how does that help my rating and the division I have been placed in? Well, it’s keeping the ball rolling down the court in difficult times. I don’t want to just play in my own backyard, so the Baja races and cruises are some of the best sailing events we have on the West Coast. “Dude, I’ve caught some really great waves down the Baja coast...I don’t want to stop now!”

While attending the NOSA meetings this year, there are many more volunteers that stand out in addition to Toni Baiunco. Almost from the start of the Ensenada Race, there was Carlos Avila who was a past Mayor of Ensenada, who took great effort for over numerous years to make this event happen. Today, Avila’s wife Dolores continues to host a Sunday night dinner for the NOSA volunteers at her house and her family still plays a big part in the race. Another person that has donated more than 10 years of their time is Tom Kennedy. Kennedy is known as the ambassador to NOSA and has been involved with keeping the line of communication open between the two cities for a long time. Then, there is Susan Heinz, who runs the starting line logistics. From finding the 30 volunteers to support all the race committee boats, to orchestrating the starting sequence, it’s an amazing and thankless job. There are many more volunteers who have all poured their hearts into this event over the years. What is so often missed behind the scenes is what keeps an event alive during low tides.

The Newport to Ensenada International Yacht Race will continue with its low and high tides of participation with more notice and attention needing to be focused on the volunteers who continue to make it happen. Please take notice of its great historical and help contribute to its success, and you too, will be noticed in the annals of history.
Sea ya.
~~~~~~~~
Len Bose is a yachting enthusiast, yacht broker and harbor columnist for
Stu News Newport.
Posted by Len Bose at 3:21 PM No comments:

On the Harbor: April – from the Baldwin Cup to N2E 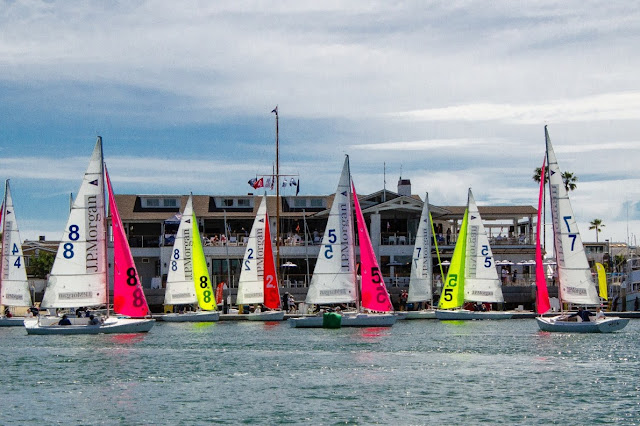 By LEN BOSE
Have you started feeling the warmth in the air and the blend of the cool sea breeze? It’s still light out at 7:30 p.m. and summer sailing will be just around the corner. Make sure you keep one hand on your tiller extension, because there has been a lot going on in the harbor this month with much more to come.
April brings in two of our harbor’s biggest events of the season with the Baldwin Cup and the Ensenada Race. Two different animals – so let’s start off with what happened at this year’s Baldwin Cup hosted by the Newport Harbor Yacht Club.
For those of you, like me, that don’t understand what team racing is after spending a dollar on cold beverages and losing your concentration on the race in front of you, I defer to the NHYC website for its definition: “Team racing, like most traditional team sports, involves strategy, advanced skill, and teamwork. However, unlike other fleet racing, team racing pits a team of four against another team of four boats. This added dimension forces players to have tremendous boat-handling ability and quick reactions.
The key to watching these races and understanding if your team is winning the race is counting the place of each of your team’s boats and if that number is less than 18, your team is winning the race. This is why you will see leading boats turn around and try to slow down the opposing team’s boats making an effort to have their teammate pass an opponent.” 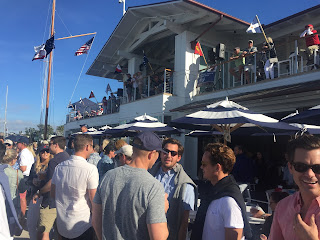 I have written this before...the excitement level is increased tremendously while attending this event with your friends and informing the umpires of their bad calls. Yes, team racing has umpires on the water similar to an umpire on the baseball field. With 25-cent cold beverages, quite often you will hear from the gallery, “Come on, ump! Make a call!” This year reported spectator attendance was more than 300 sailing fanatics and the new clubhouse intensified the atmosphere...1,000 percent.
What I enjoy the most is just hanging out with friends trying to keep my attention on the races, while saying hello to the competitors and showing how cool you are to all your friends, who you have been drinking 25-cent beverages with all day, because you know some of the best sailors in the world. I think Newport Harbor Yacht Club won again, and yes, I Uber’d from the event on Saturday and stayed away from the NHYC’s famous Mai-Tais. 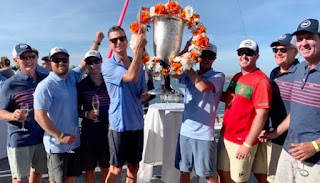 The Ensenada Race starts April 26 and the entry list is quickly approaching 200 boats. Now, we just have to hope that all this wind this week returns to the race course for the start of the race. Boats that I will be keeping my eye on are the Reynolds family’s “Team Bolt” NM 68 that just arrived in town. The real giant killer will be Ray Booth’s C&C 35 “Altheris”; he has been working on her over the last couple of years and his efforts might just get him the overall. John Raymount’s Andrews 40 “Fast Exit” found another gear in this year’s Cabo Race and I have to assume his Trans Pac crew will want more of those pickle dishes. Dave Clark’s Santa Cruz 70 “Grand Illusion” will be sailing with some of the NHYC best, and will be a team that will be looking for a podium finish. Roy Disney’s Andrews 70 “Pyewacket” is always the boat to beat if you want the overall. Rumor has it, there will be a new “Pyewacket” on the race course by Trans Pac. Then there’s Clark Team’s TP 52 “Vesper,” that will be able to handle the wishes for a big breeze. “Horizon” will not be sailing in this year’s race, so I have signed on with Jim Devling’s Rogers 46 “Carbon Footprint,” that can pull a rabbit out of the hat at any time. Should you wish us luck, it will not surprise me to carry some of that heavy hardware home from Ensenada.
Don’t forget that on May 4 and 5,  the Balboa Angling Club will be hosting the 56th annual Lily Call Bay Tournament. This event is limited to the first 75 anglers to sign up, and I have already seen some of our harbor’s best testing out their favorite spots. This is grueling stuff, with most of the anglers putting in 36 straight hours, rain or shine, on the harbor going after the Grand Slam, and we are not talking Denny’s here. We are talking the largest total weight of all four species Croaker, Corbina, Halibut and Bass caught on 4# test line max. Tight lines everyone!
Sea ya!
~~~~~~~~
Len Bose is a yachting enthusiast, yacht broker and harbor columnist for
Stu News Newport.
Posted by Len Bose at 4:26 PM No comments: