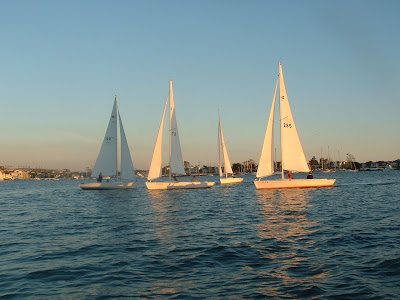 March 21, 2012 Spring twilight’s at M Mark.  We had the perfect spring day, 8-12knots of breeze, out of the west. Warm at the start and the jackets started to appear as the sun set.
We had four boats and completed 5 races of 2 v 2 windward leewards. Mike Pinckney was our designated coach and provided simple instructions at the mark rounding. From the starting boat I was able to learn a lot on how this whole Team Race thing works. I am encouraging you all to try this format of sailing. I promise you will improve your sailing skills and find another reason to use your boat. Next week come on down and give it a try! Everyone is welcomed to help me in the starting boat?
This weeks participants were Diane & Steve Kent, John Fradkin, Mike Pinckney, Alex Steele, Shannon Heausler, Jon Novack, & Jeff Tolan. 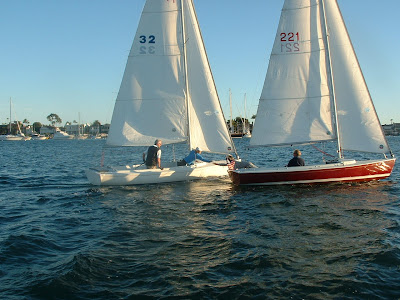 Walter Johnson and Linda Pierce did a fly by, promised to attend next week and made a beverage for the Kent’s before sailing off into the sunset.  Other people that called me and said they would be down next week was Peter Haynes, Bill Menninger , Judi Gorski & Marry Bacon.
This is starting to feel like it’s going to be a FUN series that will turn into something much larger! We also had a great time sitting around the fire at BYC after the race, which to tell you the truth is almost more fun than racing. 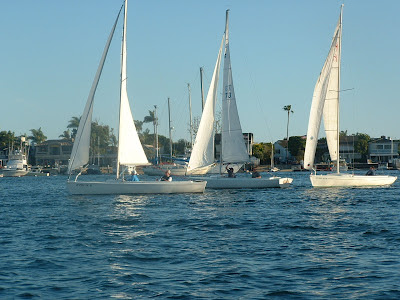 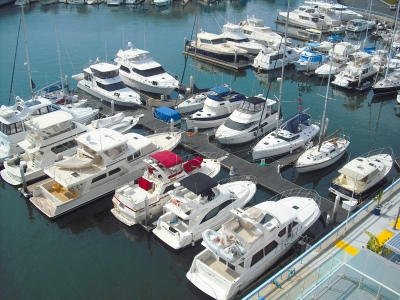 By Len Bose
This week I am going to use a surfing analogy to explain my harbor observations. I hung my surfboard up years ago because I never was very good at surfing.
For those of you who do not surf, a set is a group of three waves. Sometimes sets hit the beach with very little time in between them. Quite often, I would find myself riding some small wave in, then turn to look back out to sea and notice a lineup of two huge sets rolling in. There I would be, getting pummeled by the white wash of each breaking wave while paddling back outside, trying to keep my head above water.
Now I am not sure if any of you have looked out to sea recently, but I am starting to feel like an overweight surfer on a very short board. No matter how hard I paddle, it seems like I am not getting anywhere and the next big wave is coming in. In this analogy, the waves are the proposed tideland tax increases.
The next wave is approaching, and it seems to have the marina operators' name on it for a tax increase of 20% of their gross income, plus an additional 4% for capital improvements. That's some really cold water that could turn into harborhyperthermia. The idea that the city of Newport Beach accountants will need to audit each marina operator and look through their books does not make me feel any warmer either.I was able to "duck dive" under the white wash of the mooring permits increase and Basin Marina slip increases. In these hard economic times, I am doing my best to lose weight, but my board keeps getting smaller. I know the water is cold, but have you noticed how few boats are on the moorings and how many open slips there are in the Basin Marina?
For what it's worth, here is my recommendation for the city and the marina operators. Split the difference and only take 10% of their gross revenue and graduate the rate increase similar to the mooring permit increase.
Drop the 4% capital improvement clause and enforce the city marine codes. While you are at it, cut out the lease agreement. That feels more like a short leash on my surfboard that will just bounce back and hit me in the head.
Don't look now but here comes the next set of waves! 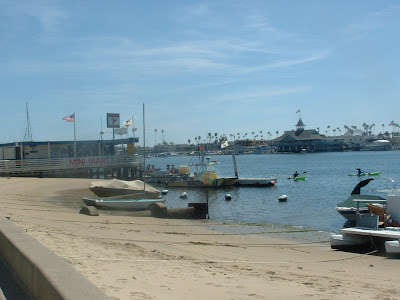 On the agenda is the Other Commercial Harbor Permitees and Residential Pier Fees. I am assuming that our shipyards, fuel docks, charter boat fleet and boat rentals are listed under Other Commercial Harbor Permitees?
This group will be the hardest hit and is the closest to home for me. I have no idea what the Ad Hoc Committee on Harbor Charges will recommend to the City Council regarding these last two waves of tax increases. I just hope the council keeps in mind the "trickle down theory" and how many more marine-related jobs could be lost.
*
Speeding into first
A cold winter front blew through the harbor last weekend. We were able to start the Balboa Yacht Clubs 66 Series inside the harbor on Saturday and out to the R4 buoy, two miles out from the Newport Pier, then back to the entrance buoy and finished just inside the harbor.
Buddy Richley, aboard Amante, told me "We had 31 knots of breeze when we rounded R4."
Aboard Roy Jones' J -133 Tango, we were one of two boats to set a spinnaker and reach a speed of 15.5 knots while dancing our way to first overall, and increased our lead in The Newport High Point Series. For the Newport High Point Score Card, go to lenboseyachts.blogspot.com.
Sea ya!
LEN BOSE is an experienced boater, yacht broker and boating columnist.
Posted by Len Bose at 8:39 AM No comments: 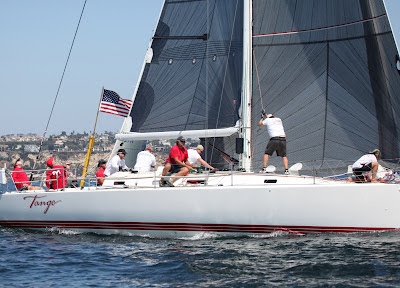 Roy Jones J 133 TANGO leading the Newport High Point Series
By Len Bose
Can you feel it? Can you hear it? Man, I can smell it and I cannot stand it any longer!
Yes, this dog can still hunt and it is time to come out of hibernation and go boating.
This year's 2012 Newport High Point Series is off the starting line, and if you did not race in the American Legion's Mid-Winter Regatta you have placed yourself in the second row. You better start looking for that first wind shift, which is Balboa Yacht Club's 66 Series on March 17.
Did I mention that I am chairing this event for BYC this year? Please take a look at balboayachtclub.com and check out all the boats that have won this event over the past 51 years. Also be sure to note that we are retuning to Catalina Island on Aug. 4 and 5. I also need to thank Nancy and Bob Kettenhofen, of Doyle Sails, for providing this year's daily trophies.
This year's Newport High Point Series leaders so far are Roy Jones' Tango in first. Tony Delfino's Violetta is in second, and in third place is Peter Bretscher's Adios. Now, throw in the rest of the fleet that will show up for the BYC 66 Series, and we are going to have an exciting High Point Series.
*
Marine recycling center coming
I am still trying to get eight annual parking passes from the city of Newport to be awarded to the winner of this year's series. I do need to thank Tara Finnigan, of the city manager's office, for helping me apply for these parking permits.
The process is much more complicated than going to a drawer and pulling out eight passes. She has really gone the extra mile for us, and I hope that the city officials see the advantages in supporting one of our harbor's sailing events.
The city is moving forward with a Marine Recycling Center at Basin Marina this year. This was my idea and it's very encouraging to know that you can make a difference by attending our Harbor Commission meetings.
*
Disposing of expired marine flares
Now that I am starting to learn how to talk the talk, I had better start walking the walk. Last weekend, I became a certified state dockwalker. As a dockwalker, I am tasked with informing boaters of how to properly dispose of used oil, absorbent pads, coolants, batteries and expired marine emergency flares.
I quickly came to learn that it is very difficult to properly dispose of expired marine flares because no one wants them. In fact, one of the manufacturers told me just to go out and burn them. Something tells me that is not a good idea. I know that the Coast Guard would fine me for burning any aerial flares in a non-emergency situation.
I have sent letters explaining the problem to our governor, state senator and Assembly member and still have not received any response. I am in touch with Vivian Matuk, the Department of Boating and Waterways' environmental coordinator, who is doing everything she can to work the process. But the solution appears to have stalled on someone's desk at the Department of Toxic Substance Control.
Rather than calling government agencies, I went to our local dump and asked the attendant if he would take the flares. He said he could take them. So, until his supervisor tells him to stop taking in the flares, I am willing to come by your boat and take your expired marine flares to the dump at no charge.
In return, I ask that you allow me to present my educational materials to you, take my survey and give you your free boater's kit. Yes, one of my business cards will be attached to the boater's kit.
To find out about which dump I went to or to see how you are doing in the Newport High Point Series, go to my blog at lenboseyachts.blogspot.com and follow me on Facebook and Twitter.
Sea ya!
LEN BOSE is an experienced boater, yacht broker and boating columnist.
Posted by Len Bose at 7:59 AM No comments:

How to dispose of your expired Marine Flares? 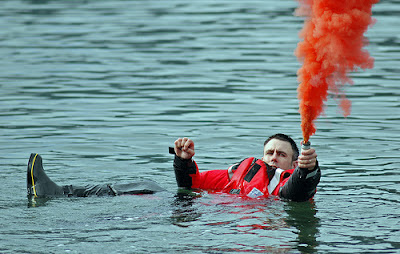 Head over to the Huntington Beach Rainbow Disposal located at 17121 Nichols Ln, HB 92647. Pull into gate # 6   Household Hazardous Waste and hand the man your flares. Not sure how long they will be able to take them for, but last week when I pulled in the man said he would take them.
Posted by Len Bose at 7:54 AM 4 comments:

Past Overall winners of BYC 66 Series!

http://youtu.be/FQNC3u5s5_I
Open two windows and start them both at the same time and watch the youtube photos.
Posted by Len Bose at 12:59 PM No comments: