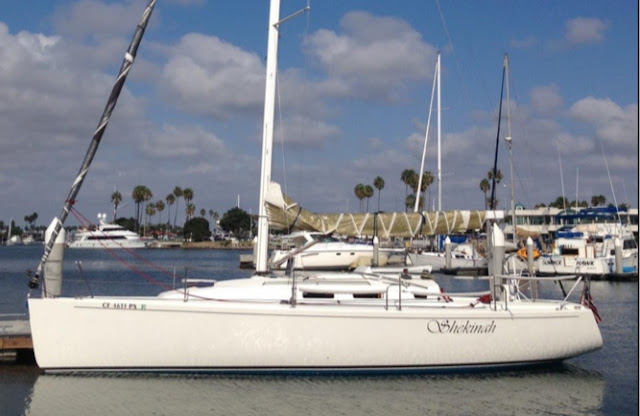 It may be impossible to have both cruising luxury and high-level race performance in the same boat, but the J 109 comes as close as can be achieved in the search for the right blend of compromises. With refrigeration, ample fresh water, and two comfortable staterooms, a couple can cruise for several weeks without needing to visit the port. The value is in her performance design and quality construction, which will allow you to sail, offshore, club race and takes the family cruising safely. This is the type of yacht you can be proud of in front of the Yacht Club. HARD TO FIND! GREAT VALUE!  VERY CLEAN BOAT. 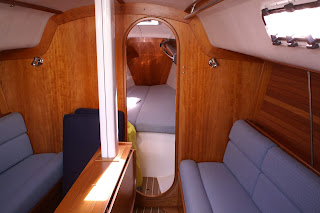 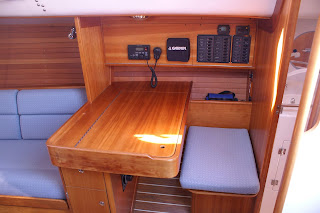 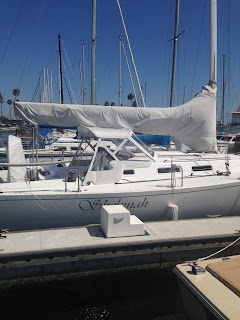 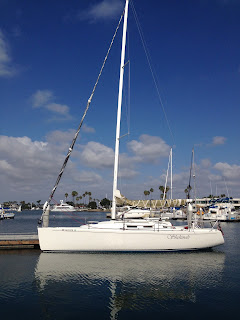 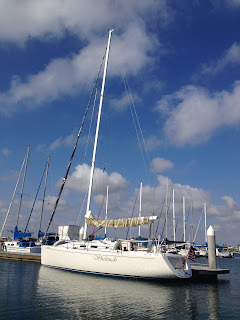 On the Harbor: Yachting may be quiet for now, but life will get back to normal 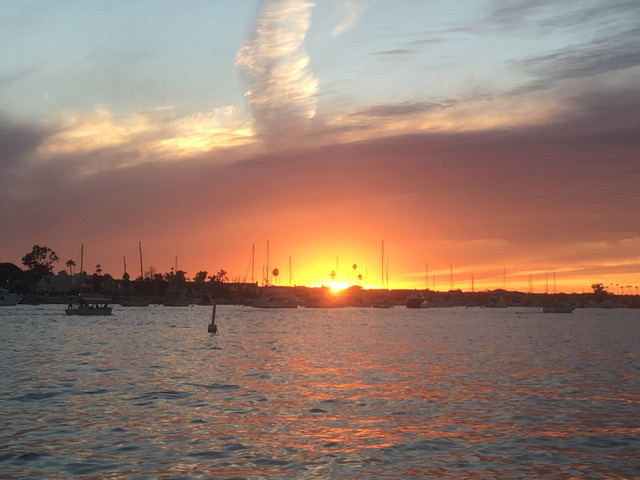 By LEN BOSE
COVID-19 or coronavirus tracking maps and models remind me of the movie WarGames. As we all sit at DEFCON 1 I look to this movie for quotes and a little bit of humor: “‘Confidence is high’ at DEFCON 1.” “Get me a report on the Whopper.” “Dammit sir...they put mayo on it…” I understand Defcon 1 is no time for a lighthearted smile and chuckle, yet, I am laughing to myself as I write this thinking about a Whopper without mayo.
What is not a laughing matter is that the yachting season has all been shut down in our harbor and other harbors throughout our country. Over this last week, the Newport Ocean Sailing Association (NOSA) canceled the Ensenada Race. NHYC has canceled its Baldwin Cup, Harbor 20 Friday Frolic and Earl Corkett Regatta. At the same time, the Bahia Corinthian Yacht Club has canceled its Bogart Series to Catalina and back, and has pushed back its H20 Weiss Series. If you are interested, you can find the yacht clubs’ official press releases on my blog site at lenboseyachts.blogspot.com. All the press releases read very similarly regretting to have to cancel their events due to the safety of its participants, volunteers and to help further general safety of the population at large. Each was a reminder that “Confidence is high” and that life will soon be back to normal.
In an effort to locate the tunnel before we look down it and find the light at its end, I reached out to Harbor Commissioner Scott Cunningham. Cunningham has been on the Harbor Commission for close to three years now and plans on staying around for another five. I am not clear when Cunningham started and when Doug West left, but in my opinion, Cunningham was the perfect person for West to pass the baton over to when it came to the matters of dredging and renewing our harbor’s RPG 54 dredging permit.
Let me remind you what RPG 54 does for the individual homeowners that are trying to obtain dredging permits for their slips. In the past, the homeowner would, for example, stop by three different government agencies, the Army Corp of Engineers, the Coastal Commission and the Water Board, to get their ticket stamped. What the City of Newport has done is rolled all three permits into one with the ability to grant the dredging permit themselves. This RPG 54 permit is good for five years with the one in place now expiring on January 1, 2021. The Harbor Commission along with Chris Miller from Public Works has already submitted the necessary applications to renew RPG 54 for another five years. Talks started last summer with the second round of talks completed in February. Negotiations continue today, and Cunningham explained that trust between the City and the different government agencies has grown substantially over time    which has reduced the bumps along the road to complete a user-friendly RPG. During the first year of our RPG, 30-40 permits were processed, while 20-25 had been processed over the last four years.
The other Harbor Commission objective Cunningham has been tasked with is the dredging of our Upper Bay. This involves the removal of 1.2 million cubic yards of sediment to obtain the depth of the original harbor dredging project back in the early 1900s. The first hurdle to reaching this goal is to shape and form a reasonable request for funding with the federal government. Cunningham has now made two trips to Washington staying for two weeks each time. The last trip was in January of this year with council members Duffield and Avery. When asked how it went Cunningham replied, “It went really well, right now we are running on all cylinders, reaching out to both senators, all our congressional representatives, the White House, EPA, the Army Corp of Engineers district, division and corporate headquarters. Two million dollars has already been received for the harbor entrance, and we could see dredging start as early as this winter.”
Because of the COVID-19 virus, I asked if progress would come to a halt. “Work continues, everything we do is not measured in days, weeks or months. Everything we are working on is more on an annual base. If you want to measure dredging you have to look at things one year at a time. The funding comes from an annual work plan budget. Those are measured in increments or milestones; we are doing everything until those budgets are released,” Cunningham shared.
Asked how the Harbor Commission meeting will continue during these times, Cunningham said they will have to wait until April 1 and see what happens. I have always felt very comfortable around Harbor Commissioner Cunningham. Each time I have engaged him in conversation, I’ve felt like I was talking to one of my childhood friends. So know that my confidence is high that our harbor’s two most difficult tasks are in very good hands.
By the way, thank you for all the good luck wishes. I’ve done well in all of the sailing events I have entered this season with a 3rd in the H20 Schock Regatta, 4th in the H20 Midwinters along with an Overall first for Horizon in the Island Race and 1st in division in the PV race. Now, remember that social distancing is easiest done while onboard a boat!
Sea ya.
~~~~~~~~
Len Bose is a yachting enthusiast, yacht broker and harbor columnist for Stu News Newport.

NEWPORT BEACH, Calif., March 17, 2020 –
In light of the COVID 19 virus,  the Newport Ocean Racing Association’s Board of Directors unanimously voted to reschedule the 73rd annual Newport to Ensenada Yacht International Race until April 23, 2021.
“Safety of our volunteers and racers is always the top priority, leaving this decision as the only viable choice,” said Commodore William Gibbs.
All current 2020 paid entrants are now automatically registered as 2021 competitors with no action required. Entrants may also request a refund or elect for a tax-deductible donation of their fee to aid with NOSA’s 2020 incurred expenses by emailing info@nosa.org
“We are grateful for the support of our volunteers, sponsors, and racers. We look forward to weathering this current crisis, and making the  2021 event better than ever,” announced Commodore Gibbs.

Baldwin Cup:
Sailboat racing is usually singular endeavor, with each boat at it alone, pushing as hard and fast as they can toward the finish line before all others. What makes team racing different is that sometimes speed is purposefully spilled by champions, and finishing first does not guarantee the win. It is with this team racing mentality of victory through teamwork, that we must announce the cancellation of this year’s NHYC Team Race Week. Neither the Baldwin Cup Team Race, nor the Palmer Trophy Grandmasters’ Team Race will take place this year.
This carefully considered decision is in pursuit of the direct safety of our participants, volunteers, and spectators, and to help further general safety of the population at large. We hope cancellations like ours are the social distancing mark traps needed to give health officials time to catch up and protect the most vulnerable among us.
We do not make this decision lightly or happily. We have been looking forward to welcoming the racers, umpires, volunteers, and spectators back for team racing excellence on the water and classic NHYC hospitality off the water. We’d recommend a 25¢ beer in the meantime to salve the disappointment, but we all know you can only find such libations at Baldwin Cup these days.
We are optimistic that next year we’ll all be in a stronger, healthier position to compete. We look forward to welcoming you all back to Team Race Week in 2021. Until then, stay healthy and remember the easiest winning combo in this race: wash your hands frequently and stay home if you can.
S/C Jeff Gordon, Chairman Baldwin Cup 2020
Posted by Len Bose at 8:23 AM No comments: