The 2013 Beneteau 46 SENSE is new to the market and ahead of it time. She will be introduced at the Annapolis Boat this October 4th-8th 2012. For the Newport Beach buyer this is a “Must See”. Perfect for Catalina or just entertaining on the harbor, with a spacious inviting cockpit that is very accessible with on step from the dock. When you step aboard you will get the SENSE that you are on a 55’ boat that can be handled by yourself with the Dock & Go system, a revolutionary innovation to dock your boat with complete confidence by yourself. The full sized main and and optional double stay rig, electric winches for sail handling will make it easy for you to set sail as soon as the afternoon breeze fills in. When you are sailing next to a grand prix racing boat, with the crew of 14, they will wonder “what is that boat, and why cant we sail away from her?”. As you arrive in Catalina a smile will appear on your face as you watch the 6 crew members, from the other boat, folding their main.
While the SENSE 46 sails have all been furled and stowed already by yourself. Be prepared for those same six crew members to swim over and ask to come aboard? Don’t think that everyone in the the cove did not see you pick up that mooring by yourself, when you hit the Dock & Go to bring the stern closer to the aft mooring loop. Your only concern will be if you brought enough cold beverages for the whole weekend?

Please call for pricing and viewings appointments for the SENSE line. 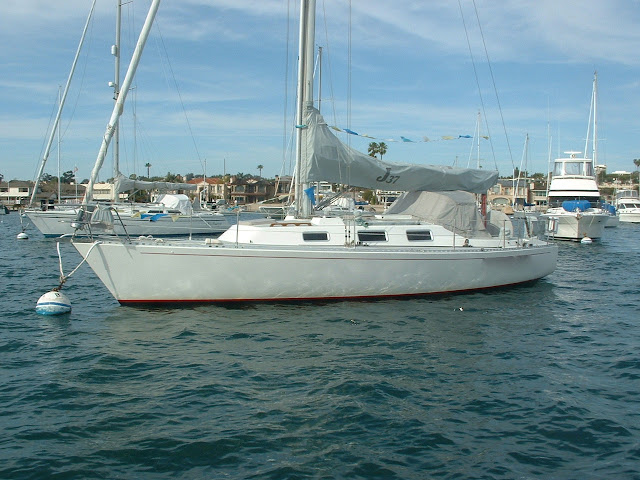 It may be impossible to have both cruising luxury and high level race performance in the same boat, but the J 37 comes as close as can be achieved in the search for the right blend of compromises. With refrigeration, ample fresh water, and two comfortable staterooms, a couple can cruise for several weeks without needing to visit port. The value is in the early design and quality construction, which will allow you to sail, offshore, club race and take the family to the islands safely. When viewing this J 37 please note the Autopilot, Refrigeration, Pressure Water, Fresh Sails and Running Rigging. This is the type of yacht you can be proud of in front of the Yacht Club. HARD TO FIND! GREAT VALUE!
Posted by Len Bose at 8:50 AM No comments:

The Harbor Report: The numbers are in for Newport winter

This year's winter series has wrapped up, with most of the events being sailed in light winds, which was the exact opposite from last year. Over at Bahia Corinthian Yacht Club, Rhonda Tolar's Farr 40, "Wild Thing," won Class A in the Hot Rum series, while "Violetta" won Class B and "Sleeping Beauty" won Class C. The club's Ocean Series is already underway, with Paul Casanova's Santa Cruz 50, "Flaca," leading the series, followed closely by Jeff Burch and his Tripp 33, "Hot Ticket."
This is a long series, and I am sure the leader board will change many times. One of the standouts in this series is Karl Pomeroy's new J/70, "Zero to 60." Karl and his crew have been all father-and-son teams, which is always heartwarming to watch.
Just up the street, Balboa Yacht Club has completed its Sunkist Series. Tolar, again with "Wild Thing," won Class A, with "It's OK" following in second and "Dare" in third. In the Thistle Fleet, Joel Buffa was this year's winner, and over in the Laser Fleet, Gator Cook took home the first-place prize.

Next in the Lido 14 Fleet, Kim McRae won A Fleet, and in B Fleet, Dave Smith won, followed by Steve Mueller in second. In the adult sabots, it was fun to see Nancy Mellon win this series. The big winners in the Harbor 20 A Fleet were Debra and Peter Haynes, followed by Carter Ford in second and John Whitney in third. In B Fleet, Gregg Kelly took the top honors with the Blatterman/Cazier team coming in second. The winner in C Fleet was Scott Barnes; next was Steve Sellinger, taking second.

Across the harbor was the NHYC Winter Series, which had 22 Harbors 20s in A Fleet, 21 in B's and five in C's. You can do the math: That's a huge turnout this year, and to no one's surprise, Diane and Bill Menninger continue to lead the fleet and won the winter series in A Fleet. Bob Yates sailed very consistently and was able to overtake Team Haynes for second place.
In B Fleet, Kelly sailed a good series and won, followed by Thomas Hartmann in second and Helen Duncan in third. Scott Barnes won the C Fleet and it looks like he will be "Movin' On," which is the name of his boat, to B's very soon. The Lehman 12's had a fleet of 12 boats, with Perry Emsiek staying in the front most of the time. The Finns had a good turnout, with Bill Bissell winning that class.
I also had time to look around the harbor this week. It appears that the New Port Marina project is back on track. That's the building that is going in between Woody's Wharf and the Crab Cooker. The place has been sitting still for most of last year, and I have seen some activity since the start of the year. I have also received word that our harbor master, Lt. Tom Slayton, is going the extra mile to show visiting yachtsmen that Newport Harbor is "the friendliest harbor in Southern California." Slayton has been in contact with Harbor Commissioners David Girling, Doug West and Paul Blank to discuss this task.
I also heard that Letty Giang is working on a public forum on SUP safety, with dates penciled in for April and May. More to come on this topic as the dates get closer. If you would like more information on this topic, you can always reach me at boseyachts@mac.com or follow my blog site at lenboseyachts.blogspot.com. Midwinters this weekend; remember it's the first race of the Newport Beach High Point Series.
Sea ya.
LEN BOSE is an experienced boater, yacht broker and boating columnist.

Harbor Report: A tradition by the water

Last week, while on the dock at the Balboa Yacht Club, I ran into my good friend Mel Redmond. He was boarding the club's electric boat with four other club members for their weekly pilgrimage to the Newport Harbor Yacht Club's yachtsmen's luncheon.
Every Wednesday, yachting enthusiasts from all points of the compass arrive at NHYC at noon for lunch and a presentation. After everyone has had time to eat lunch, the group stands for the Pledge of Allegiance and then the chairmen of the event reviews the agenda, followed by a sailing and fishing report, then into the weekly presentation. The luncheon normally ends by 1:30.
This last week, I was the self-invited guest speaker because I picked up the phone and contacted longtime chairman Robert Bents and asked if I could run a story on the luncheon this week. After a short discussion, Robert came up with the idea of me interviewing the whole group by asking questions from the podium. This week, there was a large group from the Lido Isle Yacht Club and a few members from BYC and NHYC attending. I came to find out that you do not have to be a member of a yacht club to attend; you just have to have a passion for yachting. "It's a type of community outreach," Robert explained.
According to Gordon Glass, the luncheon started around 1947. "In those days, we used to collect change from everyone and have a raffle for a bottle of vodka, scotch, gin and bourbon every week," he said. "In fact, some of the best luncheons in the '50s and '60s were aboard one of the Balboa Ferries. The ferry used to pull up twice a year to the club dock, and on one side of the boat was a lunch buffet and the other side was a bar. We would then take a harbor cruise and not make it back to NHYC until 3 most afternoons." The group gave out a sigh of fond remembrance as Gordon went over the history of the luncheon. The luncheon was also a stopping point for many international sailors making their way east for the America's Cup. Gordon went on to explain, "The yachtsmen luncheon is very often a broadening experience, rather than just our own little community."
The group explained that as many as 100 people will show up for the annual Ensenada race review. Another large showing last year was John Kilroy, who talked about his sailing experiences aboard his different large sailing yachts named Kialoa. Tom Ehman came by to talk about the America's Cup. Bents went on to tell me, "We don't always talk about boats. We have had presentations on aviation, African safaris, real estate, car makers, and history from around the harbor. We even had a guy who was trying to row around the world stop by and tried to raise funds for his project."
"It's all about our harbor's camaraderie and a willingness to share our experiences," Chuck Brewer told me. "We always learn something new here." With that, I asked the group what type of changes they would like to see in my column and around the harbor. One member felt we should rotate the Christmas boat parade route each year, and a couple of other members told me I should remind people of when sign-ups start for the youth sailing programs, and add a few more lines to my column for weekly highlights on what's going on around the harbor. All great ideas, and I hope every one of my readers give Bents a big shout-out for chairing this event for the last 10 years. Harbor traditions are what it's all about, and I, for one, have to thank Bents and all the regulars for keeping this one alive. Please mark your calendars for next week, or call NHYC for the schedule of the upcoming speakers. You will be glad you did.
Sea ya.
LEN BOSE is an experienced boater, yacht broker and boating columnist.
Posted by Len Bose at 8:27 AM No comments: